We entered the restaurant by wandering down a narrow alleyway, the ceiling of which was completely covered in fairy-lights. We settled in with some cocktails as we waited for our evening meal, soaking up the warmth & atmosphere of the place. Eventually we were able to face the cold again, & on our way back to the hotel we stopped at a stack of shipping containers that had been gentrified into a bar with street food.

We were surprised to find that this stack of shipping containers was accessible, including the top floor, albeit via a somewhat rickety lift. We enjoyed some red wine with an old floor tom-tom (drum) for a table, & listened to the live music. As the live session ended, so did our wine, & we decided to make our way back to the hotel. We would have been there much sooner had the lift not got stuck. The poor staff were almost as mortified as I was as they got out the manual crank, reset the system, & were able to get it working again.

Eventually we were safely back in the hotel in time to catch Live at The Apollo.

After a comfortable night’s sleep I woke up at around the same time, & the morning routine was repeated. We made our way back to the Shambles, which marks the start of the York Cat Trail. Since the 19th century cat sculptures have appeared on buildings all around the city centre, which have been turned into a spot-them-all trail. We wove our way between buildings, past shops, over cobbles, & onto bridges, managing to find the majority of the sculptures. Having been outside for quite some time we were very cold, so stopped at a nearby coffee shop before heading to the Christmas Market.

The Christmas Market was fairly busy even mid-week, but that didn’t stop us exploring the many stalls that lined the street. Once again we were outside for quite some time, & by lunchtime we were ready for some warmth again, so headed to a traditional Tudor pub that I could actually get into. What followed was one of the nicest meals I have ever had.

Full to the brim with delicious food, we decided to spend the afternoon exploring local museums. The Dig, an archaeological museum, was lacking in content but not school-children, so we didn’t stay there long before heading to the York Army Museum.

The lift required a member of staff to operate, but to my relief they were prompt, friendly, & capable. We were down into the museum within seconds, & wandered slowly around the exhibits. I’m currently playing a Role-Playing Game set in World War 1, & Jarred being something of a history nerd was able to identify which of the rifles on display had been assigned to my character. I was a little unsettled to see real Nazi artefacts from the second world war on display, but then a letter in another cabinet caught my eye. This letter was written by none other then Florence Nightingale, who almost single-handedly revolutionised modern medicine, & in her later years is suspected to have suffered from the same illness that ails me. Safe to say she’s something of a hero to me. She also had the handwriting of a medic – completely illegible, although fortunately there was a typed version next to it.

The final display case focused on modern warfare (not the video games), including stealth gear which you could try on. Obviously, I had to try it on, albeit with Jarred’s assistance. I present to you a gliding hedge; 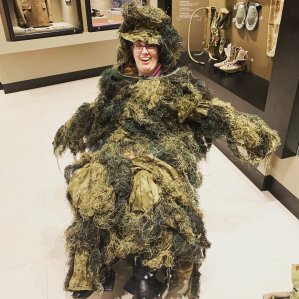 When we had made our way around the museum, Jarred had to go upstairs & let the receptionist know that we were ready to leave, but again I was fortunate in that he was prompt in his response. Once we were outside in the cold again, we decided to make our way back to the hotel room. We played another round of The Viking Game, then headed back out to the stack of shipping containers.

It took me a while to choose what I wanted from all the street food on offer, but eventually I settled on some properly-done fried chicken with barbecue sauce. We didn’t venture upstairs this time as I was still wary of the lift.

After our meal we headed towards the nearest accessible pub, which unsurprisingly turned out to be a Wetherspoon’s. A couple of pints of Strongbow Dark Fruits (what? I like it!) & a Christmas dessert later, we were ready to head back to the hotel again where we watched another episode of Live at The Apollo before turning in for the night.

The next morning was the day to go home, & we begrudgingly packed our bags (including Kontroller Kitty), & checked out. We were allowed to store our bags in a safe-room however, as we wanted to get brunch before heading home. We returned to the restaurant from the first night of our little holiday, having enjoyed it very much at the time. All too soon it was time to collect our bags & head to the bus stop. By late afternoon we were back home, Kontroller Kitty had returned to her usual position on the shelf by the PlayStation, & everything was unpacked. We were tired but relaxed, knowing that we both still had a few days before returning to work. We had conserved a little energy though, as the following day we planned to put up the Christmas decorations!

My multi-award-winning blog discusses what life is like as a disabled bisexual woman. I have a 1st class honours degree in nutrition from the University of Leeds where I now work in medical research, an achievement which was undeniably difficult to reach. Outside of work I have a passion for wrestling, rock music, and the MCU. You can find me on Twitter, Facebook, and Instagram simply by searching diaryofadisabledperson. View all posts by diaryofadisabledperson

3 thoughts on “How To Train Your Wheelchair: Part 2.”