The telephone in my grandparents’ house started to ring at 7 am on the Sunday of a bank holiday weekend in 1996, and grandad had the responsibility of the answering the call. Once he’d established that it was his son-in-law on the other end of the line, he said;

“You had a baby girl last night, and called her Emma Jane, right?”

Apparently he’d had a dream overnight in which I was dragged into the world from my comfortable abode, and almost immediately mum had given me a name, which is apparently pretty much what happened. I still don’t think that dad has forgiven my mum for that one; he didn’t get so much as a look-in.

Almost 17 years later grandad was taken into hospital, where it was established that he had a rare and particularly brutal form of cancer, which had remained undetected for many years. Because of this the cancer had already reached the final stage of its development, spreading throughout the body. No medicine could help to reverse the growth of the tumours, instead merely slowing the growth of the cancer and reducing the symptoms. It was a death sentence.

A couple of years passed and grandad remained in relatively good health considering the severity of the cancer. I visited him and grandma with my parents whenever I could, and we spent many happy hours sat watching TV game shows, shouting out the answers, and laughing at each other when we got them wrong. We would eat tea together, listen to music, and one particularly memorable time we dug out lots of old photographs of my mum and my aunt as children, complete with questionable 80’s fashion choices.

Eventually the cancer began to take a visible toll on him. He ended up in a hospice for a couple of months one winter, and after another few months at home where he was visibly weaker, he was taken into hospital. Eventually he was moved into a care home where he had 24 hour access to nurses and carers as he was almost completely bed-bound, and needed help with most basic daily tasks.

The care home was not as detached and miserable as many people might assume; the decor was warm and homely, and the staff were very friendly. There were plenty of activities for him to participate in should he so desire, including a beautiful German shepherd trained as a pets as therapy dog that he absolutely adored. From his room he could even see the wind turbines that stand on top of the Pennines in the distance.

The illness clearly caused issues for him; he was in almost constant pain and struggled to eat and drink. Regardless, whenever I went to see him he would always ask how I was doing. He was proud of my achievements in education and encouraged me to continue with my work in spite of my own illness. He somehow kept a friendly and positive attitude, and managed to genuinely care about others in a situation where many people simply retreat into themselves and lose interest in those around them. It may sound clichéd, but his attitude to life in the face of adversity has helped me to shape my own actions.

The last time I saw him he was so weak that he could barely hold his eyes open, and his speech was a quiet, almost incomprehensible murmur. I could see he was tired as he had already had a lot of visitors that day, but he still made the effort to inquire about my life. Before I left I squeezed his hand, which had been hanging limply off the side of the bed.

Over 20 years after that initial phone call, on the 20th December 2016, I had a dream that grandad had gone in the night. When the phone rang mere minutes after I woke up, much like grandad so many years before, I didn’t need to be told the news. 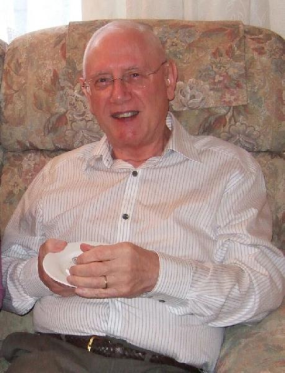