In the middle of September, shortly before Jarred was due to return for his final year of university, we decided to adopt a hamster. Having had one as a teenager I already knew what resources we would need and how to provide the best care for it, and so a couple of days later we had purchased and built a cage. Once it was kitted out with food, water, bedding, and chew toys, we were ready to adopt a furry companion.

Being unsure whether the nearby pet shop was accessible or not, Jarred went to purchase the hamster himself. He selected a 6 week old female Syrian hamster with short black and white fur, and round, pronounced ears. Apparently she had been in an enclosure with several others like her, but while she was running around the cage like a caffeinated Crash Bandicoot, the others were all huddled together in a ball in the back corner. He simply couldn’t ignore such an inquisitive and spirited little creature.

I was waiting at home when he returned with our new pet, who was in a little plastic carry-case with transparent sides. She was sniffing and running round, trying to take in all the new sounds and smells, one of which was me. She stopped in front of me and put her paws against the plastic, sniffing the air vents expectantly.

We lowered her gently into her new cage and almost immediately she began to explore. She was so small that she couldn’t turn her wheel without a little help to start it moving first and climbing up the vertical tubes into each compartment proved to be a challenge. She was not phased, even when on multiple occasions as she neared the top, she lost her footing and slid all the way down to the bottom. Once she had visited every corner of her cage she packed as much food as she could into her cheeks, grabbed some bedding, and began to make a nest for herself in one corner.

It didn’t take us too long to assign our little friend a name. She was christened “Tribble”, after the small, furry creatures that feature in an old episode of Star Trek.

Tribble is a great companion. Despite being nocturnal she is relatively active during the day, often popping out of her nest for some food and water, or to rearrange her nest. The highlight of the day comes in the evening as she wakes up properly; she absolutely adores running around the flat in her hamster ball and as soon as we show it to her, she’s out of the cage and into the ball faster than Usain Bolt. Then it’s a case of changing her food and water and perhaps adding a little bedding, or a treat to nibble on like a grape or slice of carrot. 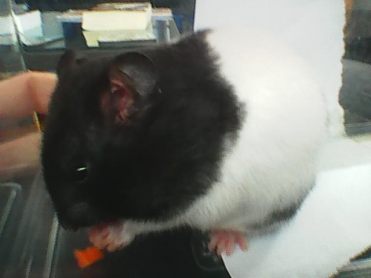 Once a week her cage gets a full clean, receiving fresh bedding as well as food and water. While Jarred disassembles the cage to clean it, I occupy Tribble in her little plastic case to prevent mischief, giving her a paper towel and a treat. She is now so comfortable with me that quite often she will make a little bed out of her paper towel, and will curl up into a Tribble-like ball, falling asleep against the warmth of my lap.

It doesn’t matter how rubbish I feel or how bad a day it has been, Tribble brightens every single day simply by existing.

Diary of a Hamster.

The big human is always first to leave the human nest, wrapped in soft things that would make nice bedding. He go to food stash and makes brown liquid from powder. He then sit by my den, and switch on big screen with moving pictures. He control it with plastic thing that is bigger than me! It is also not edible.

I go on patrol of den when he sit by me. This way, he think I just patrol cage, not that I like his company. I don’t think he notice yet. On my patrol I eat, drink, and then pee in big wheel. Then I sleep.

The smaller, wheeled human come through later. She go to food stash and she swallow small, round things whole! She has some water, and then go again. When she come back, she is wrapped in different soft things, but if I try to borrow some she get cross.

When I wake up, smaller human has a screen, a bit like big one, on her lap. She is tap, tap, tapping on one part, and strange symbols appear on screen. She seem very interested in these symbols, but I do not know what they are.

I wake up again. Sometimes I’m alone, and I rearrange things in cage as prank. Sometimes they here, and I do patrol again to see them.

It start to go dark, and humans switch on mini inside sunshines. I don’t think they see in dark like me; I eat lots of carrot. They get bigger portion of food from stash, put it in pot, and stir it. Then they put it in smaller pots, and eat it. Then all the pots need wash, which big human does, while small human looks at big screen.

I get excited because I know after pot-washing time come playtime. They put me in big, blue force-field, and then let me run around their whole den! They can cross it in few steps, but I need lots of steps. While I run, I bump into things with loud noise, and the humans laugh. They point tiny screens at me sometimes, but I don’t understand.

In their nest room they have another hamster, black and white like me, in blue force-field like me. it only in one corner, on front of stash where soft bedding they wrap around themselves is kept. It annoying hamster. When I move, it copies. I run toward it, it run and stop at exactly same time. It follow me. When I try to scare it off, my force-field bounces me away. The humans seem to find this amusing, and make loud noises with voice.

They fill up my water and food stash, and hide treats around den. Sometimes I get carrot or courgette, but my favourite is grape. I love grape. They get my force-field and take me back to den. I hunt for treats, then sleep, because running make me tired.

After a bit I wake up. Humans still sat by me watching big screen. The small human swallows more round things, and then they go back to human nest. I think this is when they change into new soft bedding wrappings. At this point I start to run in wheel, making loud sound so they can hear me, and don’t miss me. It go very dark.

The big human is always first to leave human nest…

Nerdy afternoon with friends.🤓
Turns out I'm quite good at Cards Against Humanity.
It's getting dicey. Which for a card game is a pretty impressive.
Arkham Horror: The Card Game, with chocolate. I'm happy.
🤓
As tabletop RPGs become increasingly popular, here's how being #disabled has impacted ny games: https://diaryofadisabledperson.blog/2020/02/16/diceroller/