I’m usually one to stay well clear of clichéd ideas like role models, as I believe that people should be themselves and not have to live up to anyone else’s standards. However, I cannot deny that there have been inspirations in my life, particularly where living with a disability is concerned.

Perhaps the most obvious choice for the role model of a disabled scientist is, of course, Professor Stephen Hawking. The man is legendary, and has not only pushed physics into ground-breaking territory with the discovery of Hawking radiation, but has helped to advance the medical understanding of Motor Neuron’s Disease, a relatively rare and peculiar condition. He was also involved in encouraging children to pursue the sciences as viable subjects in schools, co-authored a series of science fiction stories that are entirely feasible according to laws of physics, and attempted to make complex physics accessible to most adults in his book “A Brief History of Time”. In all of this he has not been afraid to expose just how debilitating his condition is, nor has been afraid to poke fun at it. In fact, he has featured on charity specials and TV shows like The Simpsons, and on most of these occasions his disability forms a comedic element of the performance. It would be ludicrous of me to deny that he has influenced the way I cope with my own disability, and has made me grateful for the things that I can do that he could not, such as talking with my own vocal cords.

Other inspiring role models include two of the hosts of The Last Leg, Adam Hills and Alex Brooker, both of whom are missing part of at least one limb. Although neither is wheelchair bound they have helped to make people more confident around disabled people, and have shown their viewers that disability isn’t the burden some make it out to be. They have highlighted the serious issues surrounding disability on a widely viewed television program so popular it got its own series of special episodes at the Rio 2016 Paralympics. Similarly, they have proved that disabled people are capable of caring about other social issues such as racism, sexism, Islamophobia, and homophobia, and in this they have earned my complete respect and have helped me come to terms with my own life circumstances. 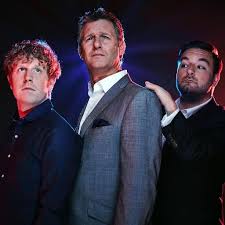 Although I am a lover of rock music, one other significant role model for me is pop superstar Lady Gaga. She is completely unafraid to stand up for what she believes in when facing an intense media following, and is open and confident about her sexuality and any other trait that sets her apart from the norm. She also suffers from fibromyalgia and has had to make difficult decisions concerning touring schedules and public appearances just to manage day-to-day existence. I would dearly love to have the sort of self-confidence she exhumes, although I perhaps wouldn’t follow her fashion choices.

There are lots of people, some famous, some who are friends and family, who have inspired me, encouraged me, and helped me to become who I am today. While I do not wish to become carbon copies of any one of them, I would hope that my actions emanate their intentions and that I could also have an impact on issues in modern society.